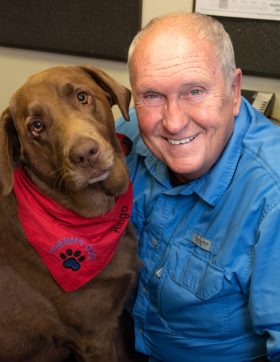 Rick Gary was inducted into the NYS Broadcasters Hall Of Fame in November 2009! He’s a veteran (was an Army MP believe it or not!) and loves his Harley. He has a puppy named “Ringo” that is named for a cowboy not a Beatle.  He thinks he’s a curmudgeon, but he’s a real softy who would give you the shirt off his back. And what a wit!

What are your hobbies?
Boating and motorcycles

Some things we need to know about you are:
I’m humorous and emotional

What is the last book that you read?
“Lone Survivor”

What would you find in your refrigerator right now?
Food

Is Elvis really dead? Why or why not?
Yes, I used to live down the street from him when I worked in Memphis…he doesn’t come out to play anymore

If somebody gave you an elephant, what would you do with it?
Ride it to work

Favorite things about CNY?
Change of seasons and food

Worst job you ever had?
Working in a mattress warehouse

Who would play you in a movie? Why?
Robert Duvall, cause he looks like me, only older.

What’s one thing you cannot go a day without?
Chocolate

If you were a famous artist, what would be on your backstage tour rider?
Pistachios

What’s waiting for you on your DVR?
Hung, Deadliest Catch, Orange County Choppers

If you could have a room full of anything,what would it be?
100 dollar bills

If you could stage the ultimate tour of any band (living or dead) who would it involve?
The Beatles

What’s the best part of your job?
Filling out questionnaires!